I have spent most of my life living in Arizona. It’s a beautiful state, to say the least. There are some incredible landscapes, dotted with saguaros, mesquite trees, palo verdes, prickly pear, agave, and creosote bushes. That’s nothing to say of the state’s most beloved tourist destinations: the Grand Canyon, Saguaro National Forest, Winslow, the Petrified Forest, Superstition Mountains, Old Tucson Studios, and Sedona. But because of Arizona’s history as a territory in the heart of the Wild West, one of the most infamous tourist spots is the Town Too Tough to Die in, Tombstone. Tombstone is home to the October 26th, 1881 gunfight at the O.K. Corral. And of course, Disney made a movie about it.

The plot: The man, the myth, the legend himself Wyatt Earp (Kurt Russell) arrives in Tombstone to join up with his brothers Morgan and Virgil (Bill Paxton and Sam Elliott) and their wives. Wyatt just wants to retire peacefully, maybe open a saloon, and wants no part in getting roped into law enforcement again, despite pleas from the marshal. When his friend Doc Holliday (Val Kilmer) starts aggravating an already dangerous gang called the cowboys, their leader, Curly Bill (Powers Boothe) starts trouble by shooting the marshal. After Curly Bill is arrested, the cowboys, led by Ike Clanton (Stephen Lang), vow vengeance. Virgil and Morgan get sworn in, with Wyatt reluctantly stepping in too, and Doc joins the brothers as they head over to the O.K. Corral to end the lawless threat once and for all.

How’s the writing?: It’s a definite C-. And why it does is for two reasons.

First, thank ambivalent diety almighty these guys all look differently, because if you tasked me to differentiate them by their personalities, I’d just sigh wearily. Wyatt is the hot-tempered one, sort of, I guess. He gets the most screen time, but I can’t remember anything Virgil or Morgan might have said throughout the movie. The rest of the characters, I can barely name a single one.

The second is the last third of the movie. You’d think the renowned gunfight might have been the climax of the movie, but it isn’t. The film continues to follow the Earps and Doc in the resulting fallout and repercussions of the gunfight, primarily the death of Morgan and Virgil’s wounding. This launches into the film’s true climax, where Wyatt and Doc launch a posse to eradicate the cowboys. I like this act enough, but compared to everything that led up to it, it just feels so slow and drags on and on.

But speaking of writing, there are two great lines of dialogue. One is Doc’s smartass delivery of “I’m your huckleberry”, and the other is Wyatt crying out “You tell ’em I’m coming! And Hell’s coming with me!” That line is just so badass I love it. 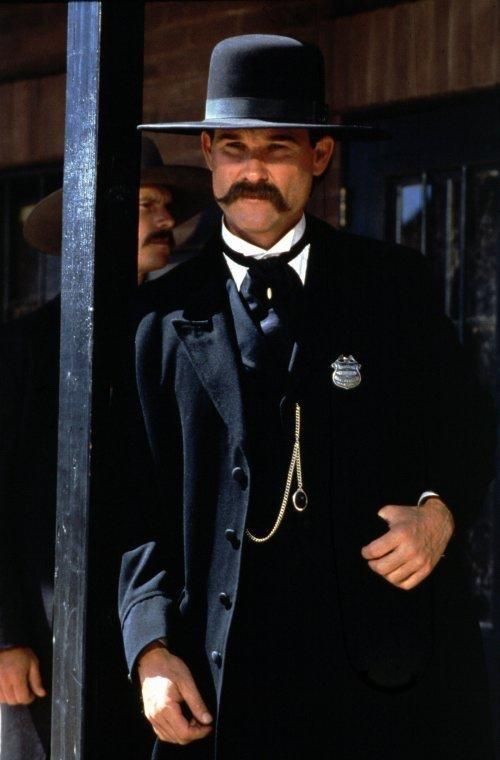 Does it give the feels?: My focus in the movie is squarely on Wyatt and his buddy Doc. Doc is the kind of character you’re waiting to die at any moment, between antagonizing cowboys and coughing up blood. But once he does start fading near the end, you’ve kind of come to expect it.

There’s still a lot of emotional scenes, particularly when Virgil’s wounded. With his arm invalid, how he responds to his wife is really beautiful.

Who made it worth it?: Despite my earlier assertion that most of the characters just kind of disappear into the background, only one has any sort of outstanding merit as a memorable character: Val Kilmer as Doc Holliday.

His character is one of those skeezy, manipulative souls who clearly doesn’t care, seems like he’s trying to throw away his life, but at the same time, he’s a loyal friend, a believer in justice, and is genuinely intelligent. He is a true hedonist, but not without a sense of honor. And Kilmer plays him with such devil-may-care ease you can’t help but feel a tad charmed by his demeanor. After all…he’s your huckleberry. 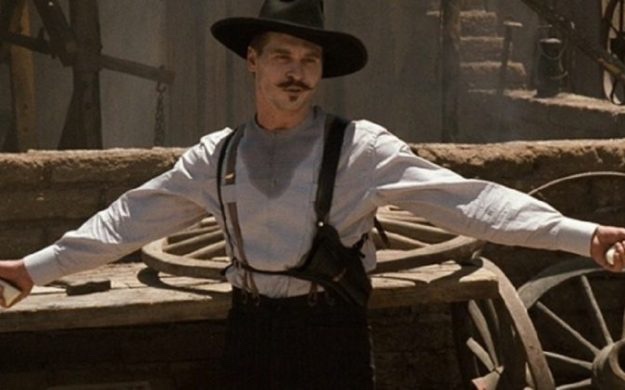 Best quality provided: This movie is western, through and through. You might swear Sergio Leone was behind this one. It feels every bit a western. It’s dirty, it’s gritty, it’s got booze and guns and horses. It’s still a Disney film, so there’s no blood, swearing, or prostitutes, but it owns up to being a western as though you expect John Wayne or Clint Eastwood go saunter on in. In fact, two lesser-known actors in this film are Charlton Heston and Michael Rooker (Guardians of the Galaxy‘s Yondu, AKA Mr. “I’m Mary Poppins, y’all!”). It was even filmed at Old Tucson Studios (The mission at the film’s beginning is the same one used in The Three Amigos.). If you’re looking for a good ol’ cowboy film, this is your ticket. 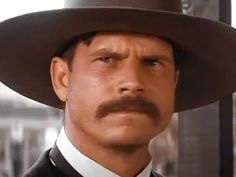 What could have been improved: One would think for a movie called Tombstone, featuring the gun fight at the O.K. Corral, that would be the film’s climax. As I stated before, the last third of the movie really drags on as Wyatt, Doc, and his posse are riding all over the territory. Yeah, there’s one scene that’s pretty awesome: a river ambush where Wyatt loses it and starts one a rampage, shouting “no!” Over and over. It’s awesome, but it doesn’t make up for so much wasted time that barely measures up to the O.K. Corral gunfight. 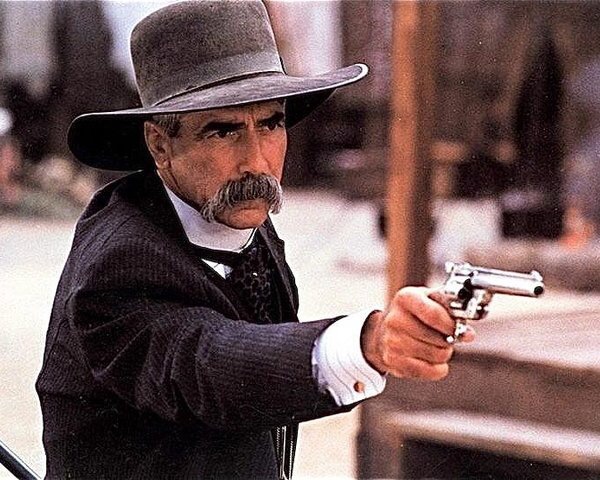 Verdict: This is a charming movie in many scenes. It’s well-acted, the set designs are great, and the costumes are first-rate. And Kurt sports the best handlebar mustache next to Sam Elliott. Honestly, it’s a good popcorn film when the guns start blazing. The dialogue scenes can get tedious, but their are moments of cinematic glory in a handful of places that warrant more than one viewing. Overall, I give this six bottles of whiskey out of ten.

Then ride off into the sunset like the desperado you are, hombre.