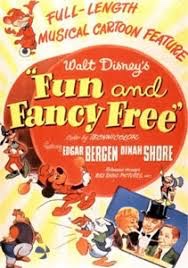 I feel like the package films of the late forties were kind of like what happens when a flat-broke person has to put together a bunch of Christmas presents together. Unable to buy anything, they just grab whatever’s around the house. An unused coloring book? It’ll do! A sweater that’s too small? Someone’ll like it! A pot holder someone made and gifted seven years ago? Sure, why not?! And before long, Cousin Mikey is opening a present that has a teddy bear with a T-shirt that says “I love you beary much”, a drink coaster, a pack of batteries, a Walgreens gift card with $0.34 left on it, a Las Vegas fridge magnet, and a highlighter. Nothing wrong with any of these, per se, but you can’t help but feel a touch unfulfilled. But at least both The Adventures of Ichabod and Mr. Toad and Fun and Fancy Free contain just two half hour featurettes, rather than just bits and pieces of other random, unmatching bits. These were made with better, more theatrical parts, so Fun and Fancy Free is kind of comparable to getting a handmade sweater and a so-so video game: a lovely creation and a decent time-waster.

Okay, metaphor’s over. I promise.

Find fun for your friendly family and face Fun and Fancy Free, friends! 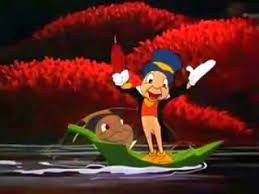 The plot: Jiminy Cricket stumbles upon a record that plays the story of Bongo the circus bear, as narrated by Dinah Shore. Bongo performs at the circus on a unicycle, but gets neglected/abused behind the scenes. Eventually, Bongo pulls a Jack London and escapes into the wilderness, only to encounter a cute girl bear, a burly bully bear, and learns how romance works in the ursine world.

After this, Jiminy finds an invitation to a party, hosted by ventriloquist Edgar Bergen, his puppets Charlie McCarthy and Mortimer Snerd, and Song of the South, Melody Time, and So Dear to My Heart regular Luana Patten. Bergen tells the tale of Mickey and the Beanstalk, where the theft of a sentient harp in Happy Valley by the giant causes a drought. Mickey sells the cow so he, Donald, and Goofy can eat, but all he gets are magic beans. The rest follows the classic story fairly well, aside from Mickey having to save the harp, too, without raising the giant’s ire. 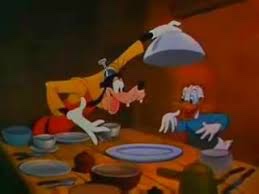 How’s the writing?: Both stories are well-suited to their respective lengths. But if anything, Bongo probably feels the most padded, particularly in the “Say it with a Slap” song, a silly number expositing how bears express love by, well…slapping each other. I feel like that was written by someone falling asleep during a nature documentary (“Hey, guys? I saw this thing last night…something about bears beating the crap out of each other…something about mating season? Whatever. That’ll make script that much more realistic.”).

The tying narrative of Jiminy listening to a record then crashing a private party is weird, but not without some charm. I guess the part of a grown man entertaining an unsupervised little girl with puppets is something that would rub some the wrong way, but it is quaint. When the Beanstalk story keeps derailing to go back to the party, it’s equal part annoying and cute. They make some good jokes, but I grew up watching Mickey and the Beanstalk narrated by My Hero Sterling Holloway (Though I hear some grew up hearing Ludwig von Drake narrating the story. Odd.). Sterling basically repeated Edgar’s lines, but minus the clips of the party. They add some good bits, and all they take away is my investment of the story proper. 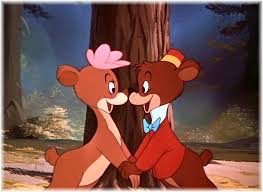 Does it give the feels?: The only place where you might feel something is the Bongo segment, where it largely hinges on Bongo trying to win the affections of Lulubelle. It’s an overly simple story of two young (what look like) bear cubs, and it plays just as cutesy as you’d expect it to be. We know Lulubelle likes Bongo, but both of them are silent, so it’s hard to be truly invested in their puppy love relationship.

The primary feels in Mickey and the Beanstalk is apprehension and danger, as the stars have to avoid awakening the wrath of the giant. But there are sweet moments brought to us by the harp, whose music is very pleasing and sweet. That’s really all that has to offer. 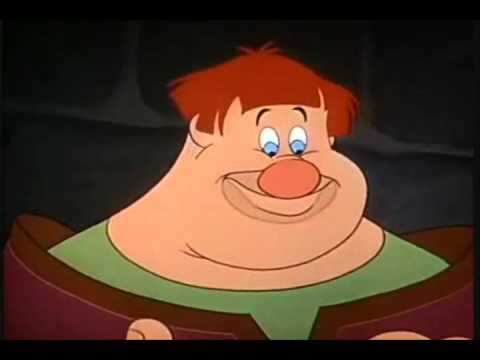 Who makes it worth it?: Jiminy’s not as endearing here as he was in Pinocchio, so that’s kind of a shame. Mickey, Donald, and Goofy are in full form here with their respective original voice actors (Walt Disney, Clarence Nash, and Pinto Colvig). But easily, easily the most entertaining character is Willie the Giant, voiced by Snow White‘s Sneezy, Billy Gilbert. (Now you know why they had that gag of his overly-dramatic sneeze. Gilbert was a vaudevillian whose repartee was comical sneezes.)

Willie has made a few appearances since, most notably as the Ghost of Christmas Present in Mickey’s Christmas Carol. Willie is a wonderful character. On one hand, he’s prone to nasty tempers, he can transform into anything he desires, and he can be quite stubborn. He is a force to be reckoned with. On the other hand, he’s a lovable doofus. He makes his entrance skipping and bouncing a ball. He is giddy at the thought of changing, particularly into a pink bunny. He stole the harp only so he can listen to her pretty music and he can be lulled to sleep. He isn’t a bad guy, really, but he does provide enough threat to our heroes to make him kind of terrifying when he gets mad. 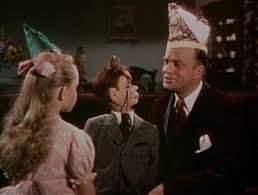 Best quality provided: The quality of the animation is pretty good for the time. It’s just as simple, cartoony, and energized as Freddy Moore’s style has always been. It’s not as detailed or realistic as earlier movies like Snow White or Bambi were, but they don’t need to be. One’s about a circus bear, and the other’s an extended Mickey cartoon.

I like some of the songs, too. The ones in Beanstalk have a ton of charm. “My, What a Happy Day” is so cute, and I love Willie’s brief, but playful “Fee Fi Fo Fum”. Even that song Goofy and Donald sing about all the food they’ll be eating, short as it is, is energized and catchy. They’re not “When you Wish Upon a Star”, but they’re not trying to be. They match the brevity of the featurette and match the comical tone. 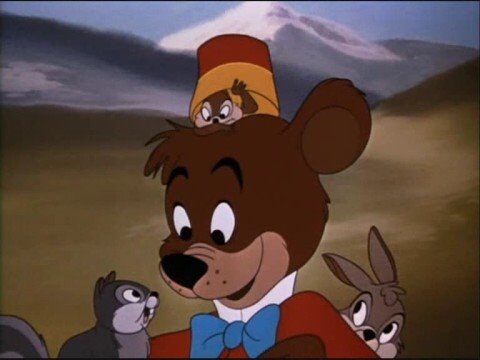 What could have been improved: While I prefer Beanstalk over Bongo, I hesitate to say what I would improve about it. There’s nothing wrong with it, really, it’s just a bit too schmaltzy for me.

With Beanstalk, I would have loved to see a better sense of scale. John Lounsbery, one of Walt’s Nine Old Men, was largely responsible for Willie’s animation, and he knows his way around big characters (He also animated Pinocchio‘s Honest John and the elephants in The Jungle Book). Now granted, it’s hard to really capture that kind of size when you’re animating something so cartoony by hand, especially back in the forties, so who am I to complain?

Also, I kind of wished Willie’s transformations would have played a bigger part in the narrative. One critic I watch online asked why Willie didn’t turn into a cheetah when chasing Mickey at the climax, and you know…he has a point. Sure, the chase is tense enough as is, but imagine had there been something similar to The Sword in the Stone‘s Wizard’s Duel, where Willie kept switching into different sizes and shapes and animals to catch Mickey. No doubt that would have been much, much more entertaining, but it also would have been a lot longer, and the film didn’t really have time for that.

Verdict: I grew up watching Beanstalk (As I elaborated on in my So Dear to My Heart review), so I worry I’m not truly objective when I say I recommend you just watch Beanstalk solo rather than Fun and Fancy Free.

Going back to my analogy from earlier, Bongo is the pleasant, time wasting video game. Beanstalk is the warm and cozy sweater. Neither are bad, but I prefer the one that makes me feel warm and fuzzy than just a mild diversion. I give this five magic harps out of ten.

Now who wants some chocolate pot roast with wisnachio…er, with pisnashnee…um, with mango salsa?