Well, it finally arrived. Not just a live-action movie featuring Winnie the Pooh and friends, but a movie that finally tackles the disquieting inevitability that has hung over the franchise since the theatrical feature film in 1977: what will happen when Christopher Robin grows up?

After the episodic featurettes that were daisy-chained into a 74 minute film (Honey Tree, Blustery Day, and Tigger Too), Christopher Robin has an earnest, heartfelt discussion with his best friend, almost unable to explain what is yet to happen. It’s a sobering, yet sweet ending to a great movie. Not since Puff the Magic Dragon has a story so somberly acknowledged the finality of childhood and the onset of adulthood. Since then, the stories have completely avoided the subject altogether. Even in 2007, when the boy was essentially replaced with Darby and her dog, Buster, in My Friends Tigger and Pooh, he still popped up in a few episodes.

But at long last, now an adult, Christopher Robin has to returned to the enchanted neighborhood of his childhood days, and we get to see our old friends again.

Bring your buddy bear and bounce back before I begin, because it’s time we review…Christopher Robin.

The plot: After he leaves the Hundred Acre Wood one last time, Christopher Robin regrettably has to bid farewell to Pooh bear. Of course, he grows up, but between going to boarding school, losing his father at a young age, going to war, getting married, having a daughter, and becoming an efficiency expert at a luggage company, Christopher Robin (Played by Ewan McGregor) has pretty much long since forgotten what it was like to play and have fun. But when Pooh loses his friends, he makes his way back to his boy companion and coaxes him to return to the forest and indirectly reminds Christopher Robin of those halcyon days when he could play with his plush friends. 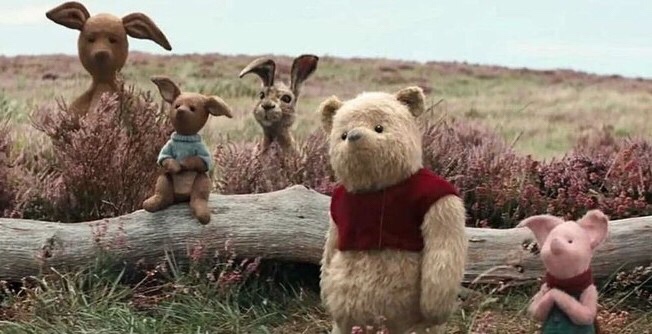 How’s the writing?: 80% of this movie is…passable. Structurally, the movie tells a natural narrative about CR losing touch with his friends, being thrust back into their world, then slowly learns his lesson about growing up. It’s a good message, if excessively overdone. And it works for a Winnie the Pooh movie. And we need that ideal in a world where being an adult is an awful state of affairs. But here’s the problem: ever seen Hook? The Haunted Mansion? The Santa Clause? Dr. Dolittle? Angels in the Outfield? The Kid? Drop Dead Fred?Because the plot of “Adult works too hard, too often, but through fantastic shenanigans realizes they need to remember what it’s like to be a child and spend more time with their kids” has been done so much you can still see the Nike imprint on the horse’s corpse.

As a millennial, I’m so fed up with this narrative. I like the lesson, but it has to be done smartly. Here, it falls flat for two reasons. One, because this trope was severely overused in the nineties. Two, because as an adult now, I better understand the pressure to work hard and provide the best I can for those who depend on me. Now that wages have stagnated, cost of living has risen higher, corporations are gouging the common man for more while we continually get shirked, I’m not interested in these stories anymore, and especially if they conclude with the protagonist loudly denouncing their boss and quitting to spend time with their family. Thank God Christopher Robin doesn’t quite go that far, but it gets close. In Hollywood, sure, you can quit projects and be fine for a year or so, but us blue collar shmucks do genuinely worry about putting food on the table if we’re unemployed for at least a month. And these are the people telling us that it’s okay to call out your boss’s BS during a meeting and promising things will go right in the end.

But that all being said, it’s not written badly, per se. It’s not offensive in its execution. The characters, however, are written rather blandly, and don’t expand much beyond their role in the film. The only two roles that are written and performed well are Pooh and Eeyore, both of whom are given a multitude of great lines with panache.

Does it give the feels?: It tries. Sweet merciful deity, it tries. And I have zero doubt hundreds have bawled and blubbered seeing Pooh and friends as worn, colorless icons of childhood. I cried, too, but it didn’t feel quite right.

One of the very first scenes is CR having personal heart-to-heart with Pooh about him going away, which would be fine, except A. It was super slow, B. It was literally the ending to 1977’s Many Adventures, and C. At least in the original, it felt like an awkward conversation out of the blue where they tried to be distracted with little things. Here, it felt way too choreographed after a chaotic party with all the others.

See, this movie is soaked in memberberry juice: it is saturated with an illusion of something you think you remember, but that’s all it is. It shows you the stuffed toys not as we remember them, but faded, worn, and neglected, coaxing a fake sense of guilt that you ever dared to age and mature. 2011’s The Muppets more or less did this, too, but much more nuanced. No one looks down on an adult who loves Kermit the Frog, but how dare a man who has to earn a living and provide for his family be forced to leave his childhood toys behind!

I guess what I’m saying is…there’s nothing wrong with these kinds of stories, but if you want to invest in the feels with this kind of story, it’s better to devote more to Pooh and his friends and their innate appeal so it at least is depending on its greatest strength.

Who made it worth it?: Even though the characters of the Hundred Acre Wood are kept solidly in character, the one standout was Brad Garrett as Eeyore.

Now, Eeyore has never had a bad voice actor: Ralph Wright was a Disney storyman, Peter Cullen is better known as Optimus Prime, and Bud Luckey was a key Pixar writer and artist, so the sawdust-stuffed donkey has been pretty darned lucky. Much like Oscar the Grouch, he’s the counterbalancing element compared to everyone else’s cheeriness, often having a snarky or dour comment at the ready. Garrett spectacularly stepped up and provided the perfect dry tones and passive-aggressive mumblings, particularly when he’s alone with Christopher Robin. His best line? “Great. It’s got a weapon”. Second best line? “Thank you for kidnapping me.” 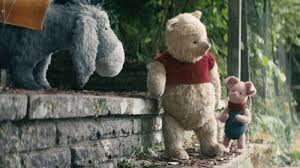 Best quality provided: The CGI on the characters is great. It’s all come a long way since the nineties. Now, textures can really pop and look as unpolished as need be. Texture is always something hand drawn animation has often floundered on. For example, to draw fur, just draw a few zig-zags over a knee or shoulder to suggest hair. Now, with computer software, Pooh and company are given matted fibers and stains, and better, they’re given volume and density. I never thought much about Pooh’s weight and mass until I could see how McGregor kept lifting him and how the grass bent under his paws. It’s the true beauty of computer animation that gets lost under all the complaints.

What could have been improved: Well, I already went off about the movie’s message and the route it took to get there, but another element that put me off was Christopher himself. Not McGregor’s performance, but the role itself and his attitude.

The movie didn’t just want him to grow up and forget. He had to go through numerous traumas, apparently. I mean, for God’s sake, he FOUGHT IN A WAR! And much like Peter Banning in Hook or Lizzie Cronin in Drop Dead Fred, he treats Pooh as an annoyance, leading to quirky shenanigans and later, frustrations. He reluctantly comes along with Pooh, and angrily chastises Pooh for his “childish” fears when they wander through the mist. This, to me, was borderline unacceptable. Pooh has no malice in his stuffing-filled body, so why does CR just act like Pooh’s wrecking his life?

I’ve seen it in real life how adults yell at their children for silly fears and problems that would have similarly paralyzed them at the same age. But this isn’t a haggard mom dragging her screaming daughter into the Haunted Mansion, it’s Christopher Robin. And given my earlier rant about the “screw work and income in favor of childhood” lesson it dangerously flirts with, here’s my pitch:

Christopher Robin, burdened with his dreary life as a husband and father and a working man, stumbled onto his childhood friend, Winnie the Pooh, who needs help finding the rest of the gang. Delighted to be reminded of his old friend, he joins Pooh and they re-explore the old stomping grounds, although at the back of his mind, he worries about his adult life in favor for frolicking on Poohsticks bridge. Until one day, he returns only to find he’s been gone for months. His wife and child have been looking for him and he’s lost his job. Now he’s coerced to find a balance between his nostalgic childhood and his modern-day responsibilities.

We millennials take our nostalgia a little more seriously than we should, and being taught to trust it is dubious at best.

Also, on the more nitpicky side, I wasn’t a fan of how the trailers kept using Pooh’s “Poohisms” as though to suggest he were Yoda. Pooh’s unusual speaking patterns make for wonderful, endearing insights, but they’ve never been meant to be riddles for deep, profound wisdom. Pooh’s charm has always been in his simplicity, and marking it with deep wisdom as though it were meant for deeper understand doesn’t jive with the character.

Verdict: I was primed to fall in love with this movie. You have no idea. I don’t mind the Disney remake phenomenon as a whole, and I always thrill to see Pooh and friends come to the big screen, treated as equals to the rest of the Disney pantheon. But for a thematic trend I thought died out a decade ago almost entirely undid the magic of Winnie the Pooh. There were lots of great parts to it, but the story still faltered, and it greatly affected much in it. I’m sorry, buddy bear, but I’m going to have to give this remake five red balloons out of ten.

And thus, “wherever they go, and whatever happens to them on the way, in that enchanted place on top of the forest, a little bear will always be waiting”.