You know, a lot of people like to point out that Goofy is the only one of Mickey’s gang to have ever procreated. Mickey and Donald both have nephews, and Minnie and Daisy have nieces. But Goofy has direct offspring. Frankly, all it does for me is remind me of that Jeff Foxworthy skit where he says if a man has big feet, big hands, big ears, and a big nose, “He better be packin’ because that’s one Goofy-lookin’ guy!”

But…I assume you didn’t need to hear any of that.

But it is curious, especially considering Goofy’s evolution. Art Babbitt, one of Goofy’s earliest animators, described him as “a composite of an everlasting optimist, a gullible Good Samaritan, a half-wit, a shiftless, good-natured hick.” But as Goofy continued to be a popular star alongside Mickey and Donald, he adapted from that to sports star, and then…suburban father.

The Goofy cartoons of the fifties renamed Goofy into “George Geef” and had him deal with modern life: road rage, quitting smoking, gambling, dieting, dealing with a cold, and yes, raising his son…Junior. Not Max, but Junior. Sort of an ideal kid of the era: wide-eyed, impulsive, but still thinks the world of his father. And he didn’t even look anything like his father. Write your own head canon on that.

But in the nineties, that changed. Chip and Dale and Donald’s family got their own shows on the Disney Afternoon block, and Goofy got his own, Goof Troop. It sort of twisted the fifties concept by making Max older than Junior, a little more rebellious, and aware of his father’s shortcomings. They included Disney’s classic bad guy Pete for additional conflict. But unlike previous Disney Afternoon shows that took place in exotic locales like Gummi Glen, Duckburg, St. Canard, or Cape Suzette, it took place in the suburb of Spoonerville.

Now, the series was released pretty compactly from September to December of 1992 with a total of 78 episodes. And in April of 1995, a movie was released that is largely believed to be in canon with the aforementioned series, called A Goofy Movie. It was directed by Kevin Lima, who would later go on to direct Tarzan and Enchanted, who wanted to make a movie exploring Goofy’s emotional side rather than just his usual clumsy shtick.

Gather your good guys and gals and grab goodies for your gaping gob, and get goofy! 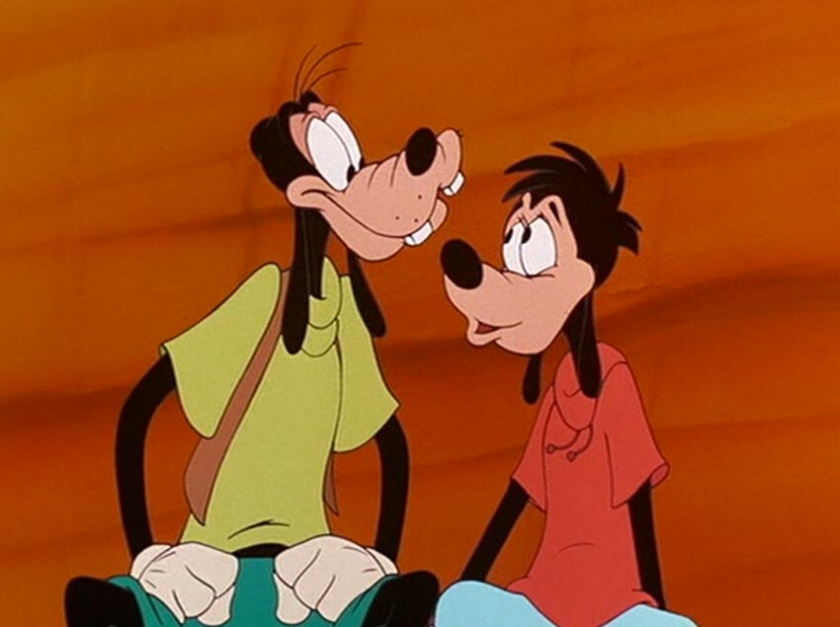 The Plot: Teenaged Maximilian “Max” Goof is at his last day of school and wants to go out with a bang. He and his buddies stage a concert at the school assembly and he wants to get the attention of his crush, Roxanne. He succeeds, but the principal calls his dad, Goofy, to warn him that Max could very well get the death penalty one day if he continues his shenanigans.

Shell shocked, Goofy decides to get Max and go on a road trip across America to Lake Destiny, Idaho for a fishing trip to bond with his son. Max, of course, not only doesn’t want to go, but he worries he’ll miss out on getting a date with Roxanne. He lies and tells her Goofy not only used to be in a band with superstar singer Powerline, but they’re actually on their way to LA to join him onstage, where Roxanne and the rest of the school can see them at home on TV.

Not wanting to disappoint his father or Roxanne, Max finds himself stuck emotionally, and struggles to find the right answer.

How’s the writing? It’s actually pretty damn brilliant. As I said, Lima wanted to make a movie focused on Goofy and his emotions, but with this kind of character, you still need the antics and the slapstick. And it all balances fluidly.

For one thing, Max isn’t a bad kid. He wants to impress the girl and do what’s popular, but he knows he can’t disappoint his father, who, while hokey, means well.

Goofy just gets caught between co-worker Pete and principal Mazur warning him that Max may have dismal future if he continues to act up. Again, neither are bad guys (so to speak), they just are seeing an incomplete picture of a teenager. Goofy just wants to be close to his son again, and even though he’s not particularly smart, he can be empathetic and even mature.

This movie handles that kind of insight brilliantly. But, lest we forget, it’s still a Goofy cartoon. Yet unlike the cartoons of yore, the plot isn’t just an excuse to have Goofy stumble around, chuckle, and give the occasional “Ya-hoo-hoo-hooey”. It’s a scenario where emotions can run high and is completely relatable.

Who made it worth it? Like any good product, remove just one element and the whole thing falls apart. All the characters work. Maybe you could excise Max’s friend Bobby or Roxanne’s BFF Stacy, but they’re there to flesh out Max and Roxanne. Their presence isn’t wasted.

Goofy has been my favorite Disney character for years. There’s something to be said about a klutz who’s not 100% all there, but still tries to be the best person he can be. In the movie, Goofy is all that and more, trying be a good father and friend to a son whose mind is in other things.

Max appeals to me because I think we’ve all struggled to figure out where we belong, caught between wanting to be a good son, but also wanting social autonomy.

Even Roxanne is a great character. In a movie where she could have easily been written as a sexy lamp, she has character. She’s shown to have similar insecurities as Max. She has trouble articulating, lacks some confidence, and even shows she does care about Max. So why’d you dump her, Max? Was she not good enough for An Extremely Goofy Movie or Mickey’s Twice Upon a Christmas?! You monster!! You two were perfect together! Does millions of online fan art mean nothing to you?!

Does it give the feels? Hoo yeah. It’s an emotional movie. We see Goofy’s stress repeatedly as he tries to do the right thing, from the catastrophe at Lester’s Possum Park to the hot tub scene with Pete. Goofy is fleshed out in surprising ways, and seeing the equally conflicted Max makes it heartfelt and beautiful.

Most of the movie, they’re at odds with each other, and when they connect, you feel it. And when Goofy’s trust gets betrayed, it feels sickeningly intense, escalating naturally, while they still act and talk like real people, even when the car starts doing some questionable physics. That’s a sign of a great story, when you don’t get distracted by a car bouncing on stone columns while a father and son are arguing, and one of them is Goofy.

Best quality provided: Like I said before, the emotions sell this movie. It could very well have been a silly, wacky movie about Goofy, but instead it took a deeper look into his motivations, his passions, his loves, and creates a whole picture. Yet Lima understood that getting too saccharine or sentimental wouldn’t work when one of your main characters is a clumsy simpleton.

What could have been improved: I’d have to say…the songs.

Don’t get me wrong: I LOVE “On the Open Road”, “Nobody Else but You”, and “After Today”. These songs are classic Disney and feel like something lifted out of a classic musical like Grease. But it’s the Powerline songs I’m not hooked on.

Nowadays, nostalgia-driven adults like me can get shirts that celebrate the fictional superstar and his music at Target. But both “Stand Out” and “I to I” just don’t do anything for me. They’re not all that catchy, and they feel safe. Not parodies of popular music or anything truly meaningful. They just kind of exist. And while I like seeing the Powerline shirts, I appreciate that they’re more of an homage to this 1995 movie than celebrating the vapid character.

Not to mention, I would have liked to see more about Powerline and who he is as a character. I don’t think he would have thrown Goofy and Max off the stage, but it might have been interesting to see a little more. But then it might have been at the detriment of an already-fluid story, so…yeah.

Verdict: This is a great movie. It’s emotional, it’s sweet, it’s funny, it’s dramatic, and it deserves all the love it gets. But I don’t think it’s an extension of Goof Troop because:

-Pete’s family (Wife Peg, daughter Pistol, and dog Chainsaw) are not in the movie.

-Neither Goofy or Pete (Or their sons) have the “face” surrounding their eyes.

-Pete is much friendlier to Goofy than he was in the show. Not to mention going from used car salesman to child photographer is quite the leap in career.

-there are no real indicators, subtle or otherwise, about it being related. They never say what their town name is, let alone “Spoonerville”. Waffles the cat isn’t there. The house is different. Even if you claim they might have moved or Pete’s family divorced, there’s no way to even tie it to the original show aside from the characters Goofy, Max, Pete, and P.J.

But I’m getting off track. In all, I recommend this wholeheartedly. Especially since despite my love for Goofy, I never cared for the show. This is the best Goofy product that isn’t one of his classic shorts. I give is nine perfect casts out of ten.